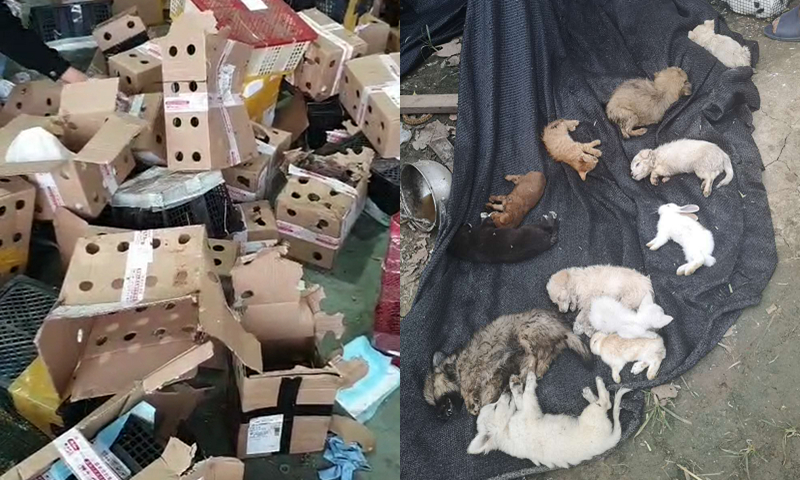 Recently, some sellers were found to sell live pets on China’s e-commerce platforms, claiming that customers can buy so-called “purebred” cats, dogs, and even turtles for a small amount of money, which has drawn strong criticism from netizens, who say the sellers disrespect life.

A blogger with over 2 million followers on China’s Twitter-like platform Sina Weibo posted on Tuesday that some merchants on one of China’s e-commerce platforms were selling “blind boxes” containing live pets at very low prices.

In some screenshots posted by the blogger, the sellers claimed that “no Chinese rural dogs are included in the blind boxes” to ensure customers that their dogs are “purebreds”. In another screenshot, one seller even says in the product description, “Place an order if you can bear it, or you just don’t buy. Dogs are life, please respect life.”

The post has drawn strong criticism from many netizens. “For those who want to raise a purebred dog but can’t afford to spend more money to buy one from a kennel, and at the same time sneer at Chinese rural dogs, such people definitely can’t keep pets properly,” commented a Weibo user. “If the pets are sick they will not spend money to take them to veterinarian. Anyway, they can buy a new one at a very low price.”

“I’m worried that this (blind box of live pets) will encourage people to abuse cats and dogs,” said another Weibo user.

The Global Times reporter typed “live pets blind boxes” and searched on Taobao, a Chinese online shopping platform, finding that there are blind boxes of turtle sold on the platform.

“I can assure you that you will get what you pay for,” said a seller to the reporter. There are blind boxes with different prices for which “you will get different breeds, sizes, and quantities of turtles.”

When asked whether pets can be delivered through express, the seller assured to the reporter that “we can send live animals by express from our place,” and told the reporter not to worry about the life of turtles during the express delivery process, for “turtle is cold-resistant, and will not die during delivery.”

However, the report called several express companies, and was told “it is not allowed to send live pets through express delivery.”

According to Article 33 of the Rules for the Implementation of the Postal Law of the People’s Republic of China, “various species of live animals” are items that are “forbidden to post and deliver or to insert in postal materials.”

China News reported on Saturday that there are also blind boxes for brand clothes. For just 9.9 yuan ($1.52), one can buy brand clothes. After receiving these clothes, it was found they are not as good as branded clothes in terms of fabric and tailoring, and there is a strange smell on the clothes, said the report.

Pets are for life, not just for lockdowns – Mirage News

Wild cats eat raw meat, so why not our pets?

Keeping pets in our life as we age – ABC News

The life-threatening dangers of snail bait