There’s nothing we wouldn’t do for our dogs. We’ve said it before, and we’ll say it again and again and again: dogs are family. We see all kinds of amazing stories that both warm our hearts and break them at the same time. Stories of people so desperate to give their dogs what they need that they’re willing to do things like sell their cars, give up their dream weddings, or even give up their homes. We love to see people so devoted to their furry family, but it’s a sad fact that many people can’t afford things like medication or surgery when their best friend needs it.

But sometimes, it takes a gamble. Or a leap of faith. Or just pure, dumb luck to make a happy ending.

Unless you’ve been living under a rock the last few weeks, you’ve likely seen that something big is up with Wall Street lately. Real big. The average Joes and Janes of the world jumped on the Gamestop/AMC stock bandwagon, spearheaded by the trading subreddit r/wallstreetbets, and turned Wall Street upside down. As the market rises and falls, some truly heartwarming stories have floated through the chaos of the news cycle and to the top of our feeds.

Reddit users have been steadfast holding their stock in what 6ABC Philadelphia called “an epic stand against the 1%”. But this sudden change in the stock market has made a huge difference in the lives of some of those who cashed out – like Reddit user MasterTheGame. Earlier this week, MasterTheGame posted a huge thank you to their fellow Redditors – thanks to their efforts, he was able to afford a surgery he only recently found out that his dog needed.

“Monday afternoon I took my best friend, an American Bully 2.5 year old dog, to the vet because he wasn’t putting any weight on his back leg. Turns out he needed knee surgery that costed $4,000.00. I broke down because I didn’t have that much, didn’t qualify for the payment plan, and it was either the surgery or wait till his other knee blew out then put him to sleep.” 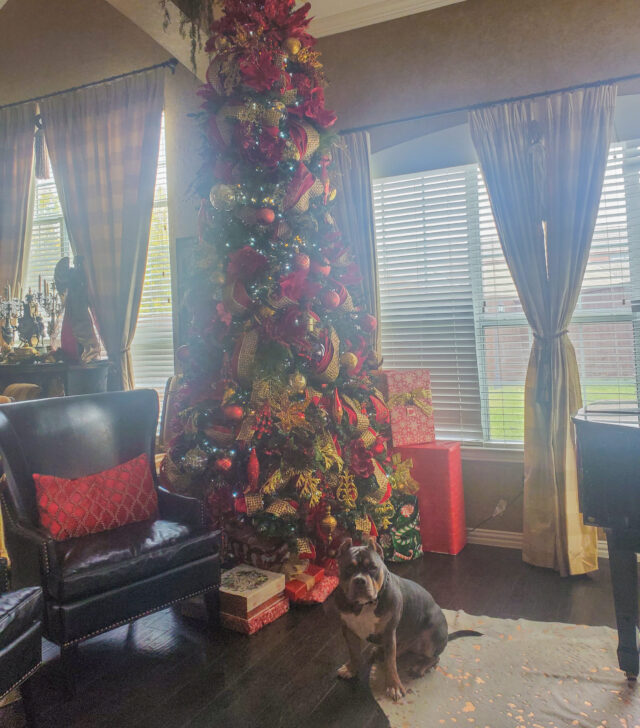 For many people, $4,000 surgery is a tall order – a make-or-break amount of money. People who have never loved a dog may not understand why one would want to spend so much money on surgery for a dog, but we dog lovers know how much more valuable a dog is.

Without the money, the choices were to either go into debt to pay for his dog’s surgery or let his dog live in pain until he needed to be put to sleep. It’s a sad fact, but sometimes, dollars and cents are what stand between life and death for the ones we love most when we don’t have the funds. However, thanks to the recent stock market phenomenon still going on right now, MasterTheGame had one more option. It was a big risk – but it was for his best friend.

“I put all the money I did have in GME around $97/ share & AMC at $4.84 Tuesday morning (a little less than $1k) with an exit plan to get out once I had enough for his surgery. This morning after market open I was able to sell enough to pay for his TPLO surgery!”

On the day that this post was made, AMC opened at $20.34 and GameStop for $50.80. With enough for his pup’s surgery, MasterTheGame cashed out and posted his thanks – along with a pic of his happy pup!

“I am in tears and really grateful. Thank you everyone and good luck!”

This spectacular, sudden shift in the market is a seemingly coordinated effort by internet users who spend most of their days discussing stock and posting memes – a sort of surprise attack on the wealthy who have been manipulating the market and torpedoing already flailing companies – like GameStop and AMC Theatres.

Because it’s so easy to buy digital games through Amazon or your console, fewer people are making the trip to GameStop to buy their video games. As a result, the company’s stock has been steadily losing value. The same goes for AMC – streaming services were already making things difficult for the theater chain, but with the dumpster fire that was 2020, the sound of nails being driven into the coffin was beginning to sound. Hedge fund managers noticed, of course, that these two formerly strong ships were taking on a lot of water and began to short sell the stock.

Thanks for coming to a dog site to explain financial terms. I’m gonna make this super easy:

Let’s say a bike shop lets someone borrow a bike in exchange for a $100 deposit  – the value of the bike – that they’ll get back when they return the bike. They immediately go and sell it for that value, $100. Later, they’re able to buy the bike back for $75. They return the bike to the shop, get back their $100, and pocket the $25 difference they made buying back low. Meanwhile, lots of other people are doing this and driving down the price of bikes. The bike store can’t make a profit anymore and eventually goes out of business.

This recent run on GameStop and AMC stock, though, has really messed with the bike-trading business. How?

Let’s say a bike shop lets someone borrow a bike in exchange for a $100 deposit  – the value of the bike – that they’ll get back when they return the bike. They immediately go and sell it for that same value, $100. But during this time, a bunch of people go to the shop to buy bikes and demand makes the price of bikes go up.

When that person tries to buy the bike they borrowed back, they find that a bike now costs $150. And the shop is gonna want that bike back – so they have no choice but to buy it for the higher price. They return the bike and get back their $100 deposit, but they’re still out the extra $50 from buying high. Now, because all these people who sold bikes that didn’t belong to them have to buy back the bikes at a higher price, everyone who owns bikes now has more value in their bikes.

This analogy isn’t perfect, and in fact, friend and internet vigilante Charles Robinson, who consulted on the explanation, tells me I’m being too nice to the guy borrowing bikes because they’re actively trying to drive the price down:

“That’s a very simple explanation, but it lets the initial bike buyer off easy. He isn’t just profiting his $25, he’s actively campaigning and telling his friends how much the bike shop sucks and how rude the owner is, saying how the owner should be out of business, even if the bike shop owner is a super nice guy — because he secretly owns another bike shop and is planning a scooter factory.

He’d be down to return his bike even at a loss (he plans to scratch it and flatten a tire intentionally) if it meant the long term failure of the bike shop.”

Now replace the word “bike” with “stock” and pretend they borrowed a million bikes at once, and you might understand why the people with deep pockets that are borrowing bikes are so upset about this. Short-selling bike-borrowers are now out over $91 billion dollars.

Why is the internet celebrating?

The people who bought up all the GameStop and AMC stock are regular people who trade from home in the afternoons after work – or when the boss isn’t looking. These are people who have medical bills to pay, kids to put through college, and dogs who need surgery they can’t usually afford. They bought when the price of “bikes” were very low, and because they did it all at once, demand has been driving the price up, forcing short-sellers to buy back the “bikes” at a higher price.

The people getting hurt are people who were on purpose bringing the value of these companies down, with little concern for the people who work for those companies so long as they could line their pockets with more sweet, sweet cash. They’ve taken to the news lately to express their outrage and disappointment – but these internet vigilantes seem to enjoy the sound of very wealthy whining. They’re online, reminding people that at times when the middle and lower class were struggling, the wealthy were celebrating and mocking the protesters occupying Wall Street with champagne and smiles.

These vigilantes are the ones who are holding on to their stock, driving the price up, and letting the little people make enough to do things like buy houses, pay off their cars, get their teeth fixed, and take care of their dogs. When the price went down and some people saw their stock go millions into the red, they held on so that others could prosper.

It’s a matter of someone losing out on buying that extra yacht, but a regular man on the internet getting to cry happy tears over surgery for his dog.

It’s amazing, the things that people can accomplish when they come together.

Please SHARE to pass on this story to a friend or family member.

This Stray Puppy Got The Training He Needed Because Of You