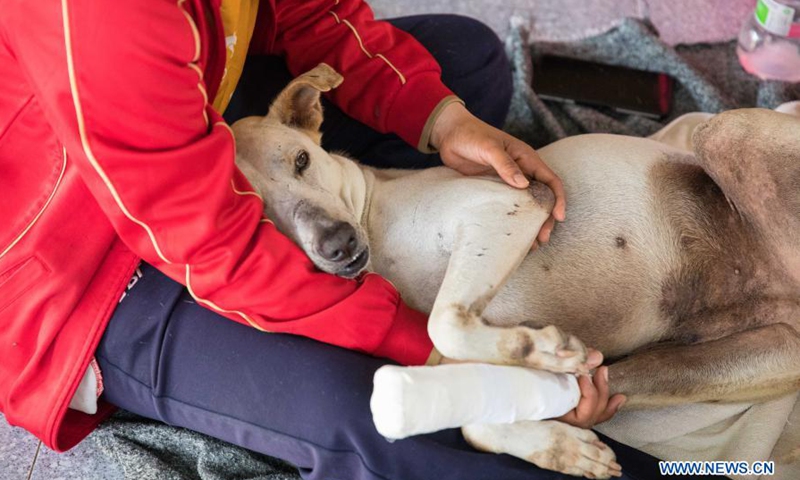 A staff member takes care of a paralyzed dog at The Man That Rescues Dogs sanctuary in Chonburi Province, Thailand, Feb. 16, 2021.Photo:Xinhua

Tomb-sweeping was a major event during the Qingming Festival on Sunday, but pet cemeteries dominated the headlines this year.

It is reported that the price of an upscale pet cemetery in Shanghai has reached nearly 290,000 yuan ($44,333), more than four times the city’s average property price,  sparking heated debated.

According to the 2020 White Paper on China’s Pet Industry released in March, the number of pet dogs and cats in China’s urban areas has reached 100.84 million in 2020, and the consumption market totaled 206.5 billion yuan. China’s urban resident population was nearly 850 million, which means one out of every 10 people owned a pet cat or dog.

China’s pet market is expected to reach 600 billion yuan by 2023, according to iiMedia Research.

With such huge market size, how to deal with the “afterlife” of pets has become an area of social concern. At present, pet funerals remain a gray area in China, with many problems impacting industry management and market operation.

According to industry practitioners, there are no laws or regulations governing animal funeral industry. Pet burial has become a “blind spot” in the current urban management in China, said industry insiders, who also called for the introduction of laws and regulations as soon as possible to regulate the operation of the industry.

Currently, most of the companies that provide burial grounds for pets use commercial land with a life span of three or five years, the manager revealed, saying the use of land is illegal.

“Due to the lack of relevant industry norms and the approval of cremation certificates, the development of the industry has been restricted, with vicious competition and false propaganda existing. It is illegal for some businesses to set up shops selling animal incinerators on Taobao, or even to launch so-called ‘national franchises’,” Wang Long, told the Global Times on Tuesday. He has run a pet cremation service company in Northwest China’s Xi’an for six years.

Wang said that business has grown over the years, with each customer spending between hundred and thousand yuan.

“The pet funeral industry is an emerging industry. It will also be a segmented industry with constant demand and increasing size in the future. If the government will release issue relevant regulations, then the whole industrial chain should be included, involving pet medical treatment, security, identity recognition, pricing standard, supervision and other aspects, which is a huge and complex field,” said a Shenzhen-based analyst surnamed Wu.

Economist Song Qinghui also suggested that China can learn from developed countries including Japan and South Korea, which have similar cultures. In general, the industry has not yet formed a healthy and orderly operation order.

“The biggest obstacle of issuing law and regulations in the industry is the land resource problem. Urban land is scarce, while suburbs are lessening,” Huang Tao, a public relations analyst, told the Global Times on Wednesday.

“Our company can handle about 100 pets per month, with services such as body cleaning, cremation and ashes storage,” Lin Junguang, co-founder of Beijing-based Rainbow Planet, told the Global Times on Tuesday, adding that there are about 30 to 40 businesses that do front-end services, such as cleaning up and body farewell ceremony, and hundreds of “unprofessional” enterprises that only have cremators.

There is a positive development prospect of the industry. More and more young people do not like to get married, but instead keep dogs and cats to express their feelings. Pet owners in Beijing and other big cities are willing to arrange funerals for their pets, Lin added.

Lin noted that he is willing to be supervised, as it would be good for pet owners and the pet funeral industry if regulations were introduced.

Apart from the farewell ceremony and the “cemetery” service, cremation is an essential component.

“When a pet dies, it has to be cremated – a pollution-free treatment regulated in China – before it can be buried. Direct burial in a cemetery without cremation is illegal. Some ‘graveyards’ for pets are actually agriculture land in the countryside, where pet remains are buried. In some places, ashes serve as fertilizer,” a staff member at a pet funeral company in Shanghai, told the Global Times on Tuesday.

The staff introduced that there are more than 200 kinds of bacteria on animal remains, of which more than 100 can be in direct contact with humans, making cremation necessary.

China has built collection points for animal remains cremation in most of the cities since 2015, under a pollution-free animal carcasses treatment system.

In 2016, there were 851 collection points in Beijing for dead animal bodies, according to Beijing’s Agriculture Bureau. Animal carcasses that require pollution-free treatment are sent or put into the collection points, which are transported and disposed by sanitation operation company. The cost is borne by the public finance, and enterprises and citizens do not need to pay.

As cremation is necessary, pet souvenirs have emerged as a popular item amongst consumers, including ashes diamond and hair crystal ball using treated pet remains and ashes, serving as a warm and beautiful memory for pet owners.

Getting Through… With Fariha Róisín

How to Help Your Dog Adjust to a New Home